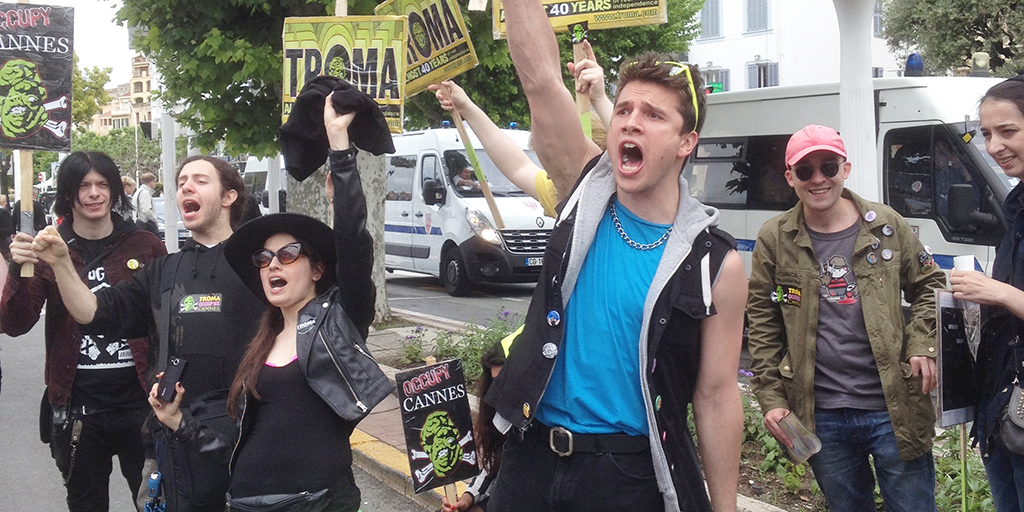 LAWRENCE — No movie studio more clearly adopted the punk-rock ethos than New York-based Troma Entertainment, source over the past 43 years of more than 1,000 low-budget flicks that typify what co-editor John Dowell calls "sLaughter" in his new book, “Horrific Humor and the Moment of Droll Grimness in Cinema: Sidesplitting sLaughter” (Rowman & Littlefield, 2017).

Iain Ellis, University of Kansas senior lecturer in English, contributes the book’s opening chapter, “Troma-tized by Punk,” arguing that Troma has combined humor, visual shock tactics and an outsider stance not only in its best-known horror film, 1985’s “The Toxic Avenger,” and others but in its publicity stunts at film festivals and the like.

Dowell knew that Ellis, author of “Brit Wits: A History of British Rock Humor” (Intellect, 2012), had previously written about punk and horror and invited him to take a stab at a chapter for a book based on Dowell’s concept of sLaughter – slaughter and laughter – which Dowell defines as “the moment in audience reception where screams and laughter collide.”

Ellis said his doctoral dissertation at Bowling Green State University dealt with the ways in which “punk culture and aesthetics had filtered into lots of different aspects of American culture” and provided a springboard for his essay on Troma.

Auteurs Lloyd Kaufman and Michael Herz founded Troma in the mid-1970s, making quickie sex comedies before turning to horror and sci-fi in the 1980s. The success of their “Toxic Avenger” in 1985 led to an avalanche of productions and distribution deals for such deathless classics as “Zombie Island Massacre,” “Surf Nazis Must Die” and “Bloodbath in Psycho Town.” Many, if not most, of Troma’s movies were released straight to VCR or DVD, echoing the D.I.Y. spirit of punk, Ellis said.

The aesthetic of sLaughter can be traced from early horror rocker Screamin’ Jay Hawkins to guillotine-wielding Alice Cooper to punk’s The Damned, The Cramps and others, Ellis writes.

“Starting with The Toxic Avenger in 1985 and still to this day, Troma has drawn from hardcore punk’s identity for its identity inspiration, for its social satire and for its blood-spattered, anarchic carnivals on film,” Ellis writes. In Troma films, as in rock, he writes, “the sLaughter moment is always an act of rebellion, a simultaneous punch and grin at what it is not, will never be, and, spitefully, would never want to be.”

Like punk rockers, Ellis writes, Troma producers and directors make their budgetary and technical limitations work for them.

“As seen in Ed Wood and Roger Corman films,” he writes, “when authentic realism is not an option, one can rejoice in the decadence of playfully deconstructing it.”

This lack of realism undercuts the horror of the on-screen splatter even as it amps up the humor.

“When we laugh at an outrageous fake blood burst in "The Toxic Avenger" or "Terror Firmer" (1999), we are celebrating the unapologetic audacity of it being that which it is not,” Ellis writes.

Like the Sex Pistols’ infamously tagging along with Queen Elizabeth’s Silver Jubilee flotilla on the River Thames, Ellis writes, Troma has “been known to take the war to the enemy, often in the form of subversive practical humor,” parading its costumed characters through the streets of the Cannes or Tribeca film festivals. It also sponsors an annual Tromadance fest to coincide with the Sundance Film Festival in Park City, Utah.

And while such now famous directors as Oliver Stone (“Platoon,” “Wall Street”) and James Gunn (“Guardians of the Galaxy”) worked on Troma productions early in their careers, Ellis writes, the studio even today “offers a last gasp of defiant autonomy at a time when independents continue to die or get sucked into the corporate bodies of studio conglomerates.”

As the world’s longest-running independent film studio, Troma gets the last laugh.